Last weekend I had the pleasure of doing a Viking-age Scandinavian fiber arts demo at California Lutheran University’s Scanfest– a festival of as you would probably guess, is comprised of all things from the lands of the midnight sun (and Denmark, too!).

I went with my dear friends Robert and Cat, where I spent both days doing viking six-stranded braiding and some spinning on a drop spindle. For dressing for the event itself, I found myself in a quandary; years ago I had constructed an outfit for a Viking-themed wedding for two of my dearest friends, Christine and Steve. Being now of the age of 30, I have noticed the interesting phenomenon of clothing magically shrinking in my closet as the years have progressed– and especially now, since I have entered graduate school and have spent long nights being comforted by pizza and ramen noodles. Beyond the original outfit just not quite fitting right, I had adorned the yoke of the tunic with fantastical embroidery– and while it was fantastic embroidery, it had firmly established itself in the realm of fantasy viking land: 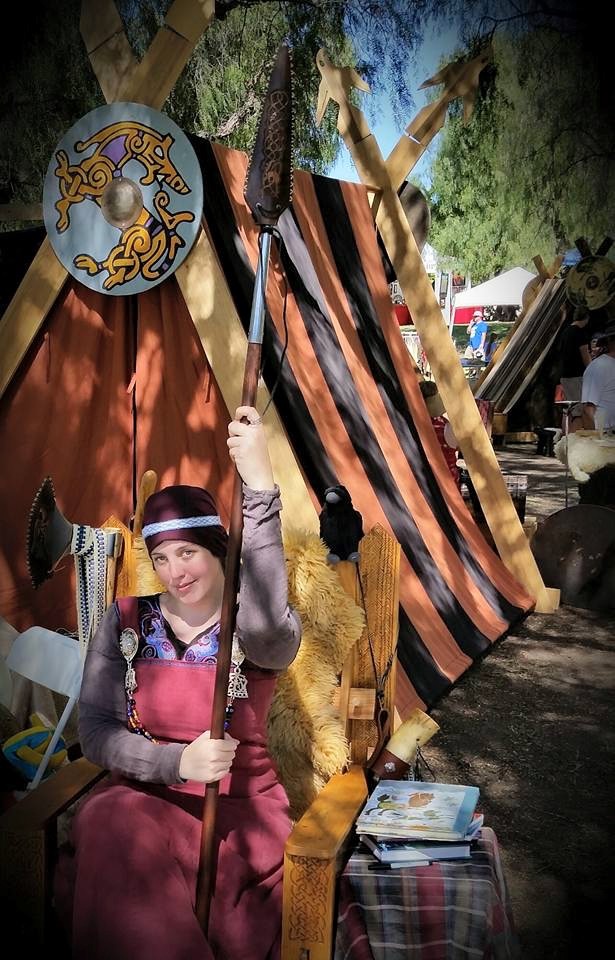 This year, I didn’t want to wear my ratty shrunken apron dress with fantasy hare motifs, I wanted to give a more realistic interpretation of a 10th century woman of the Viking era. There is very little evidence as to what actually was worn in the viking period due to limited extant garments. I based my design after some evidence in the Hedeby find, as well as the evidence presented in Hilde Thunem’s lengthy research. While the base construction is machine-sewn, I am currently in the process of hand-finishing or covering each seam with hand embroidery. As a busy student who also works, I managed to assemble my outfit in a total of 20 hours split over two days. 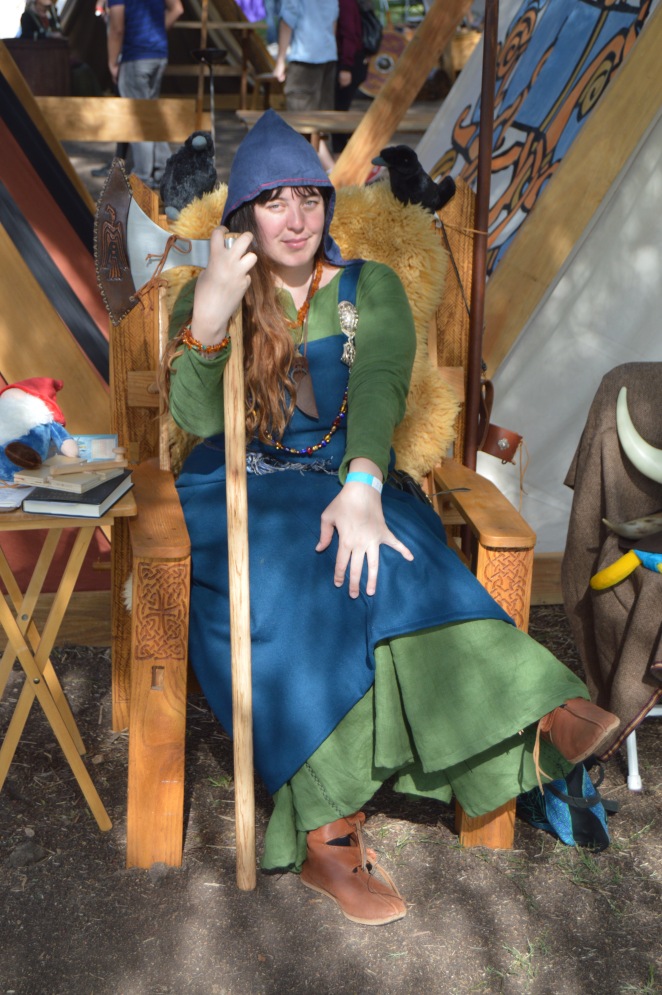 The new outfit– a step in the right direction! I just have to cover all the seams with basic embroidery or trim. Also, please ignore my non-period hair… On the day prior I was wearing my hair Rus style with a head covering and temple rings, and I just didn’t quite feel like doing that again.

In a post to come, I will enumerate and reveal my documentation for making the new apron dress and tunic. But for now, I will post some photos of the event itself: 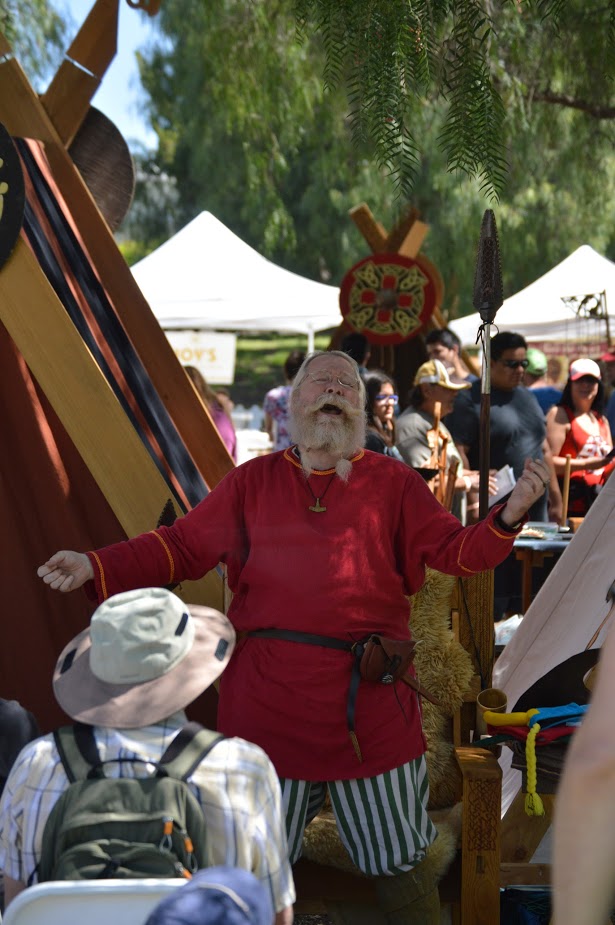 Robert Seutter (AKA True Thomas) working his magic with the crowd. 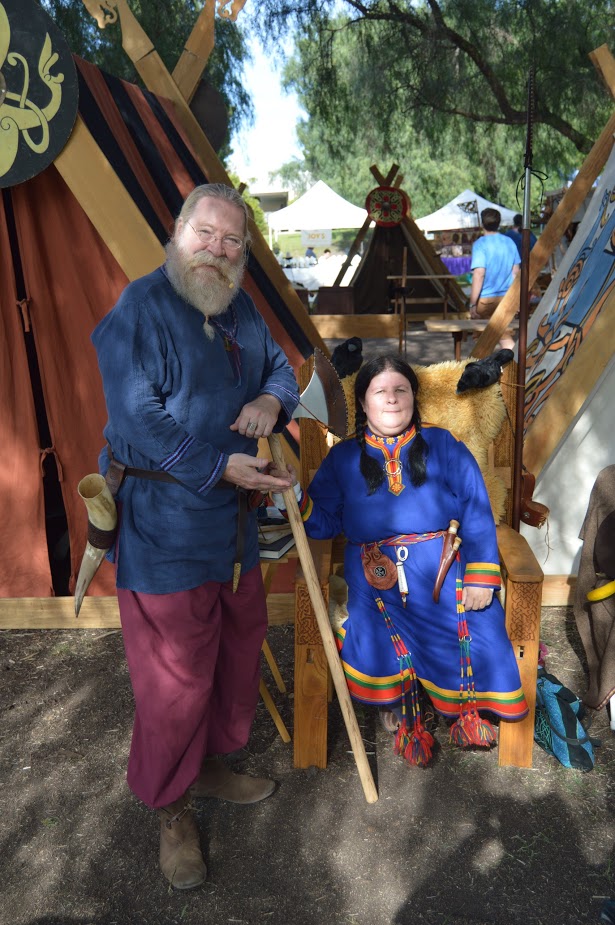 True and Stina Fagertun. Stina is a Saami storyteller who flies all the way from Norway each year to tell tales and sing joiks. 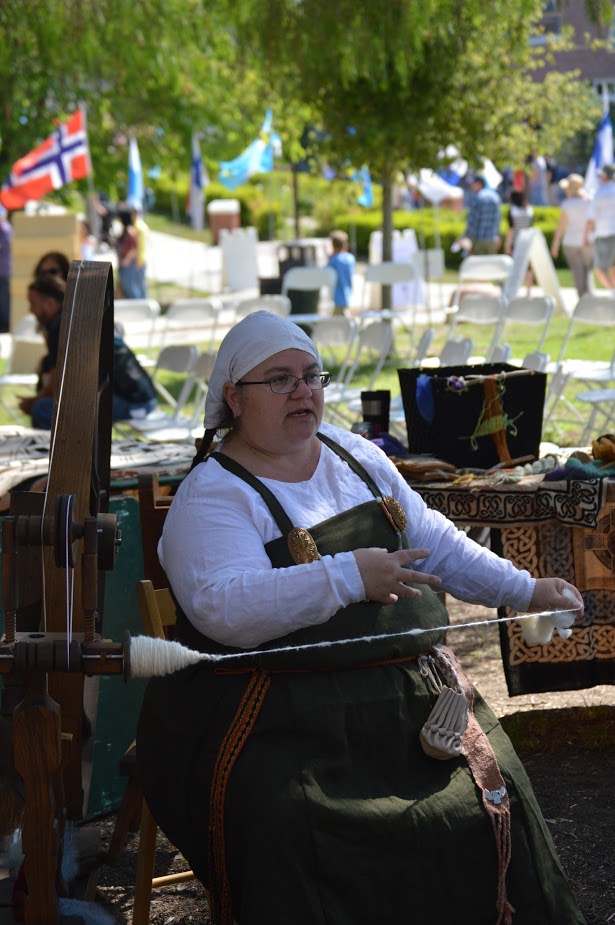 Cat Ellen (Elidh Swann) giving a spinning demonstration on a great wheel. Yes, great wheels are not from the Viking era, but Cat gave an amazing demonstration of iron age to modern age fiber arts and textile construction methods. Many expats commented fondly on her great wheel, saying “My mother from _____ used to have one in her living room!”. 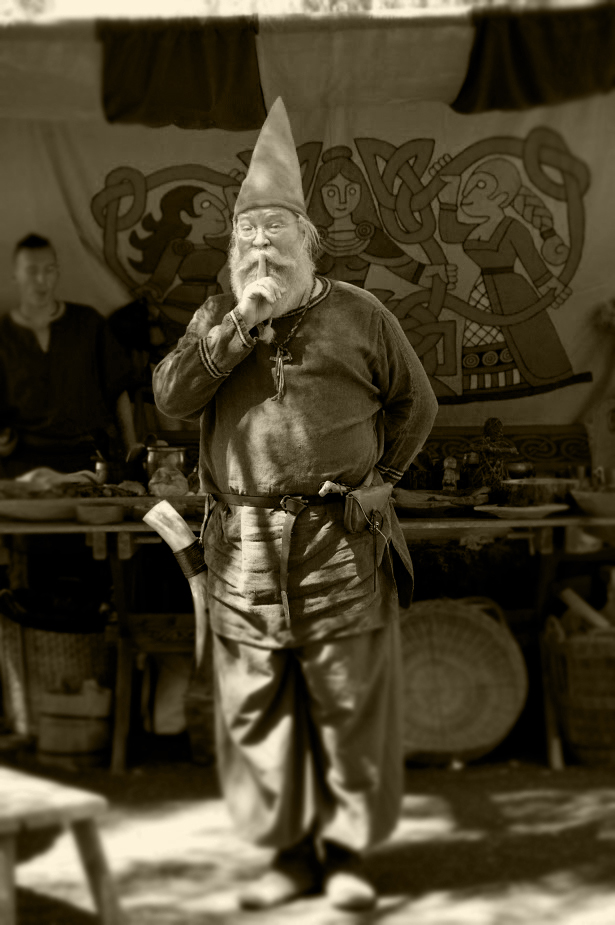 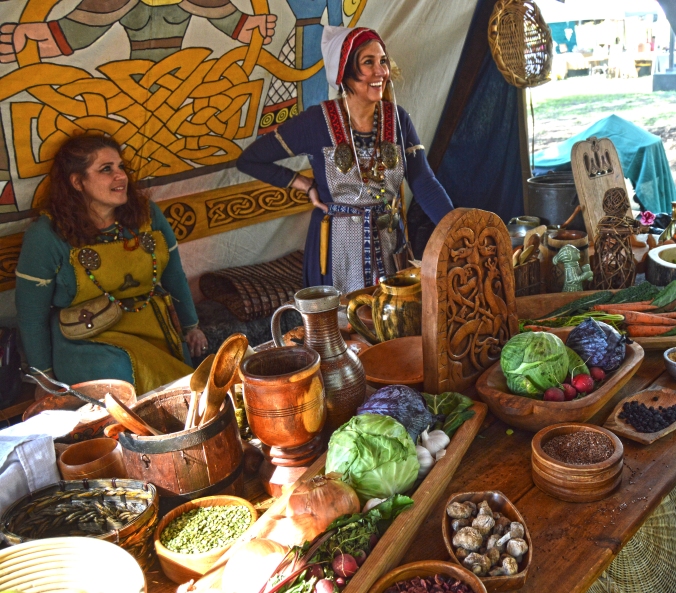 A bountiful repast at the Ravens of Odin encampment. 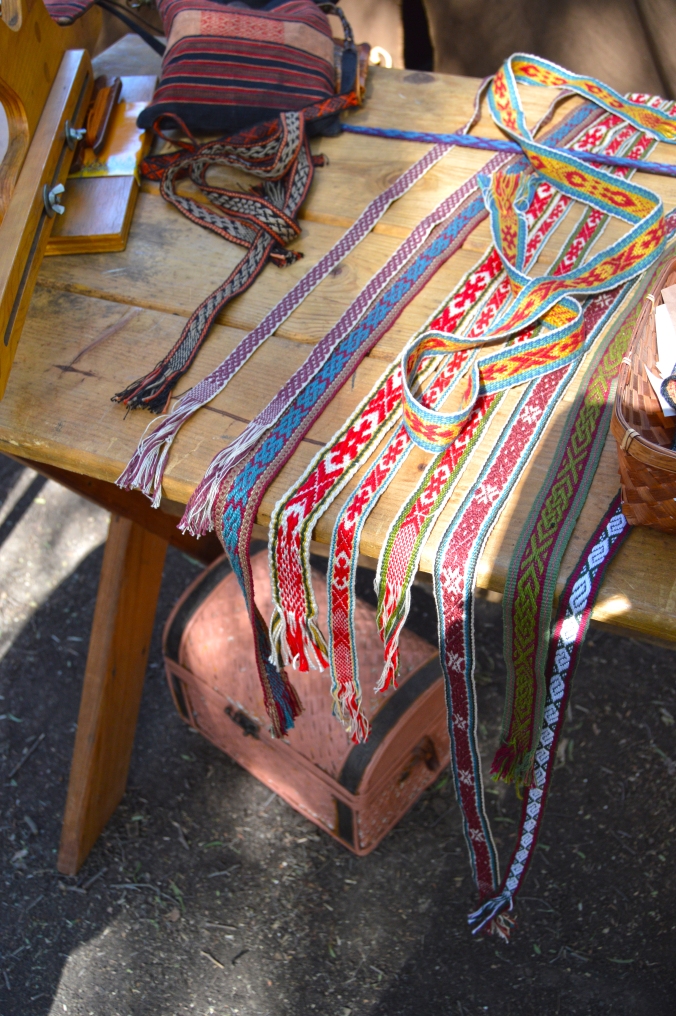 The maker at her table. 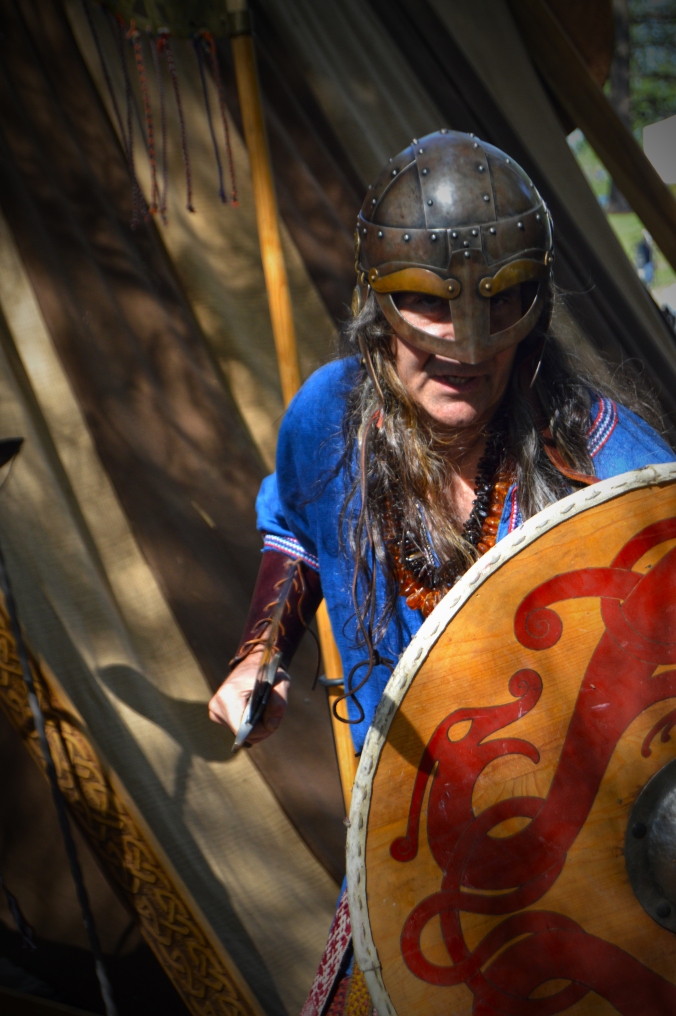 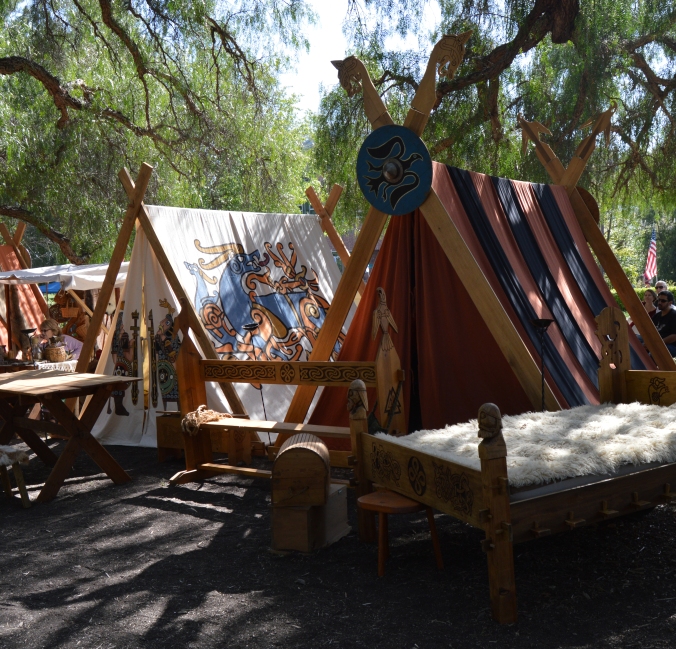 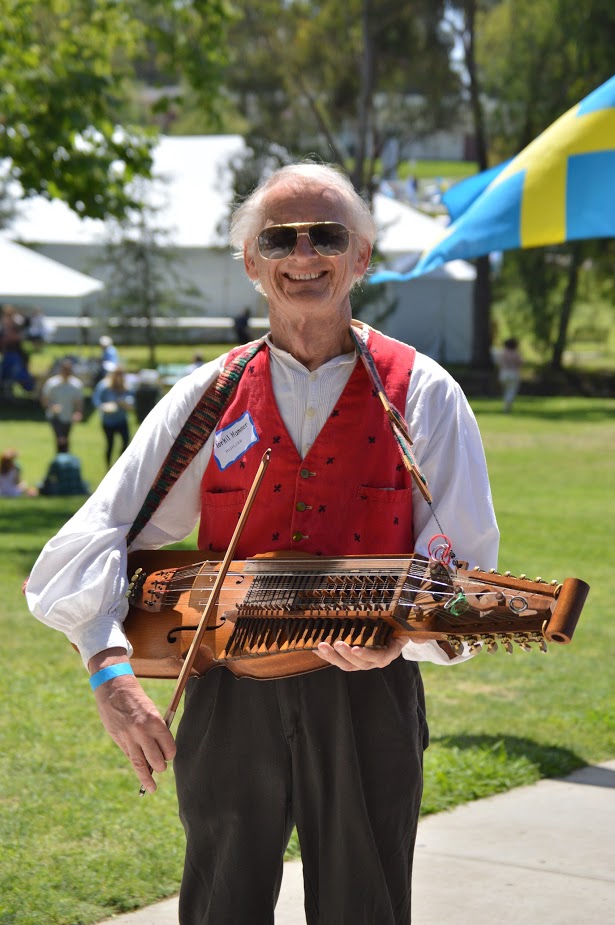 Well, that just about concludes this post! More to come on the garment construction itself with better quality photos.